Legendary chip architect, Jim Keller, has stated throughout a conference that his K12 ARM CPU project was ‘Stupidly Cancelled’ after he left his earlier employer, AMD.

The ‘Future of Compute’ convention was held by the Department of Computer Science and Automation, Indian Institute of Science the place Jim Keller gave a quick overview of the varied tasks he has labored on and the basics of chip design.

Jim states that whereas he was at AMD, he labored on Zen 1 and laid down the plans to do Zen 2 and Zen 3 which implies that Zen 3 may most likely be the final Jim Keller design we acquired from him because the latest Zen 4 and Zen 5 projects may very well be designed internally by a brand new staff at AMD. During his time at AMD, Jim and his staff observed that the cache design for ARM and x86 CPU was principally the identical amongst different issues such because the execution unit and the one distinction between the 2 processor architectures was the decode unit so that they determined to work on a brand new chip, recognized to us as K12 that was later canceled by AMD.

It is revealed by Jim Keller that the K12 ARM CPU mission was really canceled after he left the corporate by sure managers. As he places it, most managers are scared of adjusting stuff however as a result of he himself was an architect, he is not afraid of modifications like this and the work he did throughout his time at AMD was ‘Fun’. 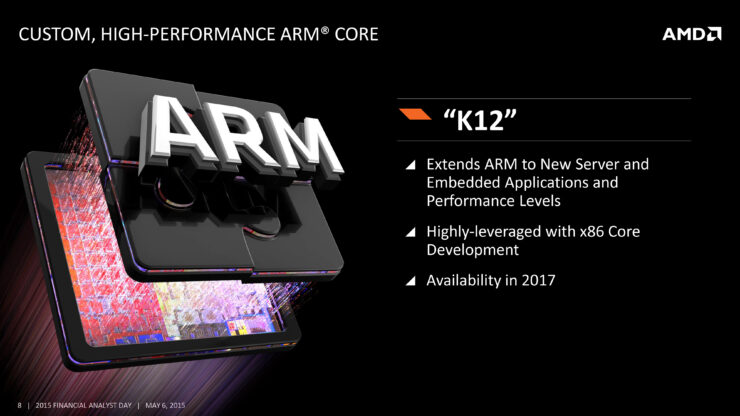 As for what AMD’s K12 was going to be, the ARMv8-A-based CPU was designed to launch alongside the Zen mission and was anticipated to concentrate on high-frequency and energy effectivity environments, aiming on the dense server, embedded, and semi-custom market segments. AMD has since introduced varied semi-custom server chips based mostly on the Zen core structure and they’re shifting into the dense compute phase with their new Zen 4C structure subsequent 12 months which can debut on the EPYC Bergamo platform. AMD’s embedded chips additionally make use of Zen silicon so it appears to be like like AMD had a very totally different plan to make the most of Zen for its whole computing wants reasonably than counting on a separate ARM-focused structure.

“But I’ll tell you from my standpoint, when you look at compute solutions, whether it’s x86 or ARM or even other areas, that is an area for our focus on investment for us,” AMD CFO Devinder Kumar responded to a query in regards to the firm’s view of competing Arm chips. “We know compute really well. Even ARM, as you referenced, we have a very good relationship with ARM. And we understand that our customers want to work with us with that particular product to deliver the solutions. We stand ready to go ahead and do that even though it’s not x86, although we believe x86 is a dominant strength in that area.”

With that stated, AMD’s CFO, Devinder Kumar, has already said that they’re able to make ARM chips if there is a want and demand for them. AMD can be coming into the semi-custom area the place it plans to make the most of third get together chiplets within the close to future in order that’s additionally one thing which may make the most of ARM chips however these will not be a completely in-house design that AMD was making with K12 when Jim was round. Jim additionally joined Intel again in 2018 and left in 2020 after engaged on varied chip tasks & is at the moment the performing CTO at Tenstorrent.

The Summer of NIMBY in Silicon Valley’s Poshest Town

Why the CHIPS Act Exists and What It Could Mean for the U.S.

How Real-Life and Fictional Horror Seeped Into ‘The Black Phone’

With Climate Deal in Sight, Democrats Turn Hopes on Sinema

These People Are British And Have Never Had A Cup Of Tea. Seriously

Economy contracts by 0.1% in second quarter

As India marks 75 years of independence, Mahatma Gandhi is cast aside

The Summer of NIMBY in Silicon Valley’s Poshest Town

SAN FRANCISCO — Tech business titans have navigated loads to get the place they're right now —...

13 red flag cancer symptoms to absolutely get checked out

A Renaissance in American Hardcore Music

Economy contracts by 0.1% in second quarter